The easy and simple answer is “Yes – without a doubt!” But why? Here are just three reasons why a website is a must for any serious business.

Accessibility
You know what it’s like. You’ve been at work all day, or you’ve been taxi-ing the kids around to and from school, footie lessons, friends’ houses etc – and before you know it, you’re back at home and it’s far too late to visit a shop, or talk to a call centre (if you even wanted to). So you click on the computer, and start surfing to see what you can find. A website ensures that your business is available to prospective customers at all times – even if you personally are not. In a short time, your prospective customers can have found out all about you, your services, how to get more information, dropped you an enquiry, or even bought your products – all while you snooze in front of the telly… or are sipping wine with friends on the terrace.

Customers will speak to YOU!
How many times have you searched through an online directory, looking for something specific, and then are faced with rows of telephone numbers. Then a supplier with a website is in the list – human nature dictates that you will click on that because straight away you can find out more information without having to pick up a phone, or drive to their premises. Well, you’re not alone… Don’t you think your customers would do the same?

Increase your customer base
No matter whether you are doing business on a local level, or gaining clients internationally, a website can help you reach out to more people. It would be lovely if we had enough money to advertise in every publication in the world, flypost every flat surface in every country, or have your logo emblazoned on every vehicle ever driven, have our image blasting on every television channel ever broadcasting – but life just isn’t like that. And hey, if you had enough money to do that, you’d be retiring to yout luxury yacht and supping margheritas. What a website can do for you is the next best thing. With the internet, there are no national borders, no geographical limitaions – you’re are simply in the place caled “online”. Perhaps you have a new offer coming up – get it on your website, and you are automatically advertising worldwide. Planning a new range? Then your website can display that for you across all the compass points.

Of course there are many many more reasons to have a website – but even with just these… can you afford not to?

It never ceases to amaze us how many people get sucked into the American style Internet scams. There are so many of these shady ‘companies’ it beggars belief. If it wasn’t for knowing these things exist BECAUSE they would be really rather comical.

We can only assume that there are always vulnerable, willing newbies, still with notions (based on articles they have read about the Silicon Valley success stories of the past) that the Internet has made many millionaires in the heady .com boom. It still does. But nowadays it takes imagination and originality to really come up with something new and lucrative.

We stumbled across this one last night and haven’t laughing since, it’s called Smart Money Websites. It’s hilarious, and in the usual style of these thing full of absurd claims and ludicrous ‘I love’ you testimonials like this…

“I absolutely LOVE Smart Money Websites. For the first time in my life I’ve been able to do my own websites, squeeze pages, record audio, split test, Oh my gosh it’s all so easy….”

This ‘business’ was started by a “Wayne van Dyke” who claims to be a venture capitalist, supposedly involved with highly profitable technology start ups.

1. A search on Wayne van Dyke leads only to stories about Dick van Dyke thus burying him if it is his real identity in Google (we suspect so you don’t find the truth!).

2. If he’s so damned smart why doesn’t he name his past successes.

In the usual hard sell direct marketing style, the text of this ‘site’ if you can call it that, has lots of repetition, lots of numbers ($50,000 is the favourite), and lots of buttons to suck you into the $1 trail.

So, what are they selling. Well, that’s our point, it’s not really clear. It’s either an MLM (Multi Level Marketing) sell this same business onto others idea, or they are selling pre-build affiliate marketing site. But lets be honest, who cares what they are selling. it’s the way they are selling it that is just plain wrong. They prey on the ill informed.

Here’s some numbers for you – apparently in their view this is the yearly cost of a website.

How to make your first $50K (home study course) – $297
(Reality: Chances are completely worthless if their site is anything to go by!)

Site Builder – $250
(Reality: FREE, assuming they mean a basic site building package as is often bundled with hosting accounts, but they are not clear)

Split Testing – $249
(Reality: FREE, but, creating similar gateway pages runs the risk of getting you banned from Google, and is no substitute for a little common sense)

Webstats – $348
(Reality: FREE with any hosting plan, or you can use a service like StatCounter)

Audio – $348
(Reality: FREE, they simply don’t know what they are talking about)

Dashboard – $1200
(Reality : FREE, probably little more than a host’s control panel or a well designed Admin panel within a custom site which would have been purchased with the build)

Webmaster @$50/hr. x 400 hrs – $20,000
(This is our favourite, the sites we build for people don’t often take more than a few hours – if any – to look after. If you look at our client list you’ll see that if that this was the case we’d be semi-retired now! Yes, it does cost to build a quality site, but a good web design company should be delivering you, at this level, a site you can completely manage and maintain yourself)

Here’s the good news, you only get to pay them $647 a year for all this! The only thing missing from this to truly convince us that this was a scam was a photo of the founder on a Hawaiian beach with a cocktail in hand just to show how they are enjoying spending your money. As the old saying goes, “if it sounds to good to be true – it probably is”.

We did send them a polite (okay, polite is stretching the truth a bit) email to ask what they were ACTUALLY selling, but needless to say have not as yet got a response…

Are you a shopkeeper? 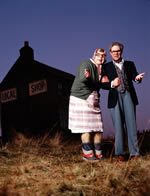 So, you’ve just got your new website and you are feeling pretty pleased with yourself. You’ve started adding it as your signature in forums, you’re looking for links and reciprocal links, and you’re starting to learn a bit about what Search Engine Optimization is, and realizing you can do a large part of it yourself. You’re doing everything right – but – Google isn’t picking you up (be patient, it doesn’t happen overnight), and you aren’t getting the hits you’d wish for… What have you missed?

Think of it this way – your website is like a shop front, at this moment in time you are in a back street. As with a real shop, few of us can afford a prime position on the high street. Irrespective of how good your site is, what gets prime position is the millions of pounds that the likes of, for instance EasyJet spend on billboard space, other conventional media, and Internet advertising on key sites.

Now, here’s the good news. Lanzarote is a small island, so a little bit of investment of time and money off-line can raise your profile considerably. Make sure your address is seen everywhere, put it on the ads you’ve placed in magazines (simple, but often forgotten), have a look at advertising on some of the key websites on the island too (we’re happy to advise if you aren’t sure what you are looking for – it’s all part of the service), make sure you post flyers on the notice boards around the island, make sure you have cards on you always, make sure your friends have cards to give out. Talk to people, it really is that simple.

Whatever you do, don’t just sit back and wait for people to come to you – it’s not going to happen. As with all businesses you have to have a great product and you have to let people know in as many ways as are available to you, on and off-line, what you have to offer.

Choosing the right domain name is vital for your success on the internet. Get it right – and the world is your oyster. Get it wrong – and your business may struggle to recover. Here are just 6 easy tips to help you on that path. END_OF_DOCUMENT_TOKEN_TO_BE_REPLACED