Plagiarism and Copyright on the Internet

The simplest advice of all is if you want to protect your Intellectual Property and don’t want it to be copied, stolen or abused – don’t publish it on the Internet. Be your work words, photographs, websites or anything else that can be described as creative this is the only sure way to protect yourself. However, it’s nigh on impossible these days to run any business without making a certain amount of examples and information about your business easily available. (The same can be pretty much applied to your private life too with the prevalence of Social Networking sites like Facebook!)

Now, here’s a short story for you by way of example; After a somewhat ‘entertaining’ evening I knocked together a little t-shirt design for a bit of fun on a site I use – I am not going to mention the site here, for the simple reason that despite feeling let down by them, it remains one of my favourite sites and I have no wish to get myself banned…

This t-shirt – drop your politics and personal opinions here – was a mickey take of the (in my opinion) Diana inquest fiasco. Having been subjected on a Lanzarote forum to an ongoing, and ludicrous debate, from a number of conspiracy theorists I decided to have a joke with a couple of friends.

If you’re easily offended by comments on this topic – look away now. The image appears lower down the page…

In bullet points, here is the chain of events;

So here it is the design on the t-shirt…. 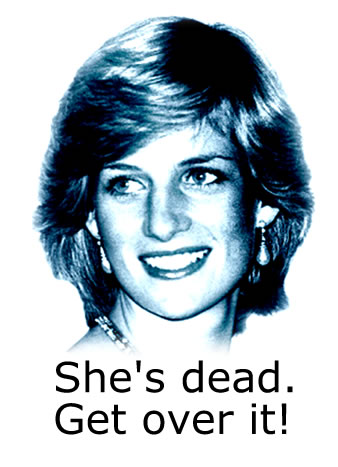 …and here is the link to the Goat Boy version that I allege was an imitation. (I’ve refrained from using a thumbnail so as not to get accused of ‘stealing’ it from their website)! I wonder where they sourced their image?

Goat Boy (Peter isn’t it?) – if you are reading this my offer still stands, I am happy to remove this post when you supply me verifiable copies of the documentation you have claimed on three occasions to have. I can’t really say fairer than that can I? Do feel free to ‘whinge’ about my allegation in the comments on this site as I am happy to enter into either open or private discussion…

6 Responses to Plagiarism and Copyright on the Internet