Why it is worth chasing spammers… 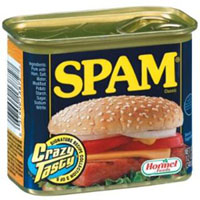 Every now and then I get a bee in my bonnet about the spam we receive – though its pointless chasing the endless  farmed spam, when you can clearly identify legitimate companies its worth a shot.

You may have seen a couple of other articles on this site where I have taken spamming up with Little Chef and their list brokers, B2B Data Lists. This morning I received this response from the Direct Marketing Commission;

“Further to your complaint against B2B DataLists and further to our recent investigations into complaints about the direct marketing activities of B2B Data Lists Group/Data Providers UK, the case files have been referred to the panel of Commissioners for formal adjudication and they have now reached their conclusions.

The investigation by the Direct Marketing Commission began in June this year following receipt of a number of complaints.  The Commission looked at the concerns raised by the complainants and also considered previous complaints received within the last year.

As a result of these investigations, the Commission has upheld four breaches of the Fourth Edition of the Direct Marketing Code of Practice.  In relation to your specific case, the Commissioners considered that you were not treated courteously by B2B Data Lists when requesting information about the origins of a list which had been used to email businesses for a promotion that was clearly designed for families/parents. Your legitimate questions were met with threats of legal action. The Commissioners decided it was appropriate therefore to uphold a breach of Clause 9.33 in the Direct Marketing Code of Practice which states that:

If a complaint is found to be justified, members should settle it quickly, effectively and courteously.  If a complaint is not justified, this should be politely explained to the complainant.  Where there is any uncertainty, the member should give the customer the benefit of the doubt.

Given the above breach of the Code in relation to this complaint, the Commissioners upheld a breach of 3.19 which asks that:

In all their dealings with consumers, other businesses and each other, members must act decently, fairly and reasonably, fulfilling their contractual obligations at all times.

In this case the Commissioners did not feel they could uphold a breach of Clause 3.13 which states that:

Members must accept that in the context of this Code they are normally responsible for any action (including the content of commercial communications) taken on their behalf by their staff, their sales agents, their agencies, their direct marketing suppliers and others.

The marketing messages were issued by Little Chef who were acting in an independent capacity using data from B2B Data Lists.

The Commissioners also took this into account in relation to Clause 14.12 which states that:

Unless they have prior consent, members must not send marketing communications to business email addresses for goods or services that the recipient would only purchase in an individual capacity. However, members may send unsolicited emails to staff of limited companies and plcs provided:

a) the goods and services marketed are restricted to those that the recipient would purchase when acting in a professional capacity, and

b) the recipient is offered a simple mechanism by which to unsubscribe/opt-out of receiving further email marketing messages from the sender.

Members must not send unsolicited email marketing messages to partners/staff of a partnership or a sole trader and its staff unless the requirements of paras 14.7 and 14.10  are met.

The Commissioners concluded there were unanswered questions as to list or lists of addresses supplied by B2B Data Lists. These questions centred on whether this was largely or partly a list of business e-mail addresses where the need for an opt-in depends on the nature of the businesses involved or whether this was a list of individual e-mail addresses where an opt-in is mandatory. This may have been an issue for all the parties involved but their ability to reach a conclusion was constrained by the limited information available and the limited extent to which B2B Data Lists was prepared to co-operate in the latter stages of the investigations.

Overall, the Direct Marketing Commission concluded that the company had breached key provisions of the DMA’s Direct Marketing Code of Practice on a repeated basis, that data was sold without proper regard for whether it met client requirements, that the company then sought through unacceptable terms and conditions to absolve itself of responsibility for this data, that refunds were refused or offered in last resort and clients and complainants treated poorly. It was a particular concern that this seems to be happening with considerable regularity with four separate cases and two earlier cases resolved informally and with three or four further approaches  to DMC by people concerned over the company’s practices or/and with complaints that might justify further formal investigations depending on circumstances.

In these circumstances the Commission decided that the appropriate sanction would be to recommend to the DMA, that B2B Data Lists/Data Providers UK are removed from DMA membership. This of course is subject to any appeal.

May I thank you for raising this complaint as it is only through cases such as yours that we can fully monitor the direct marketing practices of companies operating in this industry.”

I’d call that a result… Thank you to the Direct Marketing Association for demonstrating that there is a body out there that care, and will take appropriate action when necessary!